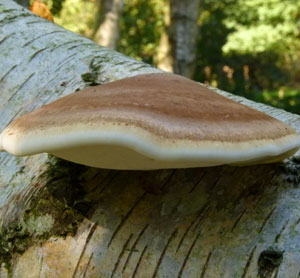 Birch polypore (Piptoporus betulinus) is always found attacking birch trees but we have little evidence as to whether there is a preference for the two common birch species and whether it is the same in different regions. All is needed is to record which species of tree birch the fungus is attacking.  Silver birch (Betula pendula) always has white bark, usually with black streaks in the lower part. The leaves are sharply pointed and have prominent teeth separated by a number of smaller teeth.  Downy birch (Betula pubescens) has a brown, grey or white trunk, without black streaks. The leaves do not have a long point and all the teeth are more or less the same size. There is a tendency for Downy birch to occur in damper sites than Silver birch.