How big are fungi? 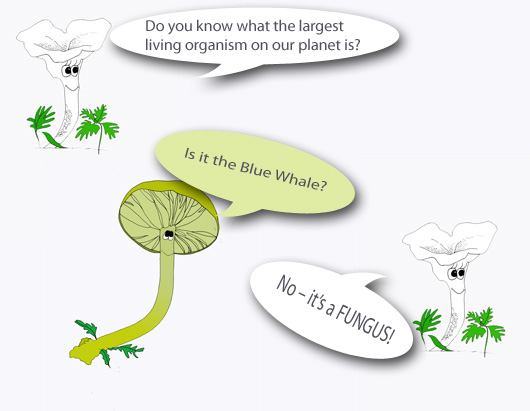 Some fungi are ‘microscopic’ which means that they are so small that you can’t see them with your eyes.  You have to look at them through a microscope, which makes them look bigger.  The yeast fungi that we use in bread and beer making, and in the 'watch a fungus fizz' activity, are microscopic fungi.

Cows get a helping hand from microscopic fungi too, to break down grass and hay.  These fungi are called 'chytrids' or 'rumen fungi'.

Did you know that the fine threads (mycelium) of  Armillaria ostoyae stretch for over 5.5 miles? This fungus is found in the Malheur National Forest in Oregon, in the United States of America.   Although its mycelium stretches for miles the fruit bodies that it produces are the size of a normal field mushroom.

The fungus is thought to be about 2,400 years old! A truly humungous fungus!

Some fungal fruit bodies are very large such as that of the termite fungus, Termitomyces titanicus, whose cap can be as large as 1 metre in diameter.  This is arguably the largest edible fungus on the planet - try finding it in the Guinness Book of World Records!